By Luke Ridger in Blog

Many will go hard, of course most will go home empty handed. If you have picked up on the image then you’ll know I’m talking about the T20 World Cup. This latest cricketing showpiece is being hosted in a country that needs very little introducing to the world of cricket. The Indian culture has always had a love affair with bat and ball so logically to give this Cricket mad country the World Cup made sense to everyone. Now those who are not familiar with cricket as a sport or to trade don’t feel daunted by this article because I’m going to try and get you to sample the delights of T20 cricket. 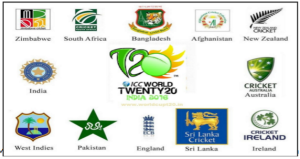 We of course invented the format, but the Indians shaped it into one of the biggest spectator sports in the world. The days when Geoffrey Boycott chewed up balls for fun are long gone. This format has also changed the way we bet and trade. High Velocity stuff that leaves us gasping for more, there are however some extreme side effects to this sport so lets go through some fundamental issues. I would also point out that the Indian Premier League tags on to the end of this Tournament so I’m hoping we as traders will be fine tuned.

Lets talk teams, when you are trading any sport it pays to know what you are working with. To know teams is advantageous but to know playing surfaces is more important. They go hand in hand because teams will play better in their own conditions. I will say that most of the skills and tricks will be learnt over time. Remember this is a competitive market where millions of pounds worth of money is put on the line, we all have differing opinions, prices look big to some but small to others but regardless it’s about risk. In the high octane environment of T20 cricket , time is money not only because money is being matched by the second but because if you stop still as a trader in a live market you’ll get a rude awakening. Back to teams, I’ve not looked too deep into the associate nations because it is in my opinion the most difficult conditions to try and overpower the established nations.

Lets look at Ireland, currently gaining match practice in the UAE. They’ve had a real horror show against a side who are 300pts below them in the rankings (in other words they really wouldn’t be in the same league) Ireland traded at 1.01 chasing 134. Look at this scorecard. 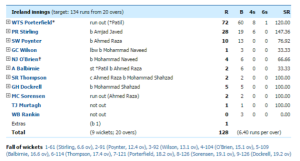 We have Porterfield and Stirling starting quite well averaging around 8.5 runs an over by the 12.3 they required 43 from 45 balls. What happened after sums up T20 cricket and why we can be thankful there is a format to trade. We are finding T20 cricket popping up all around the world, some have similar dynamics. I previously traded a similar game between Scotland and UAE. Scotland reduced UAE to a similar score but conditions told me Scotland would struggle. I layed Scotland anticipating early wickets and I wasn’t disappointed. This is where a bit of pitch knowledge and team knowledge go hand in hand. That’s all for part 1.

Well a few of us witnessed a spectacle in cricket trading tonight, it was very much a case of when the lights come on you find out what you’ve been dancing with. I’m talking about South Africa vs England of course. If we needed any signs that these two will not win the World Cup tonight was pretty much a tale tell. I think first and foremost they were pretty evenly matched so a strategy that came into play was the double lay. The double lay for those who are not familiar is literally laying both teams for a fixed price and leaving them to run. As long as you lay both below 2.00 you’ll be in profit. Now a few traders like to use 1.4 for both teams. This isn’t a bad number but if a team hits 1.4 they normally trade much lower. Tonight both teams traded 1.2 so we can see the potential of tweaking the system. Me and another trader talked about 1.25/1.3 as our ratio so for me that is a number I stick with. It is a pretty simple standard trade and one many of us can do with very little cricket experience or knowledge.

There is a pretty simple strategy , lets get back to teams. I’ve talked about where the World cup is being hosted. That instantly makes India favourites. 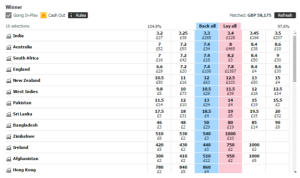 You can’t really argue with the pricing here, India red hot to win this and probably very short considering the amount games they need to win. I have them priced at 4.5 . England are stupidly short in my book but an expensive lay. Pakistan and Sri Lanka both look decent back to lays although Sri Lanka’s form is worrying they do have experience on these conditions that could be more than enough for the bigger sides in the competition.

Take the bottom 5 teams out the equation, I feel it will be extremely hard for them in India with exception of Bangladesh who may trouble one or two. It is worth noting that the market is still forming as we are a month away so keep an eye on it.

Question is will the 1.4 strategy work in the World Cup, I don’t think it will as much. That is my opinion of course but i feel there are other strategies we can use for the World Cup that could be slightly safer.