By Martin Futter in Blog

One of the most important aspects of Betfair Football Trading is being able to analyse your strategies and work out if they are any good.

On that note we have decided today to do a deep dive analysis of a profitable Betfair trading strategy 'Gary's Second Half Goal Filter' which has been performing exceptionally well since it's inception. (An 87% win rate at time of writing over 300 results).

A big thank you to Gary for sharing this with the Betfair Trading Community!

At the time of writing - This filter is available to view on our 'Profitable member filters' section on our software so you have full access to both the filter and it's football trading selections. 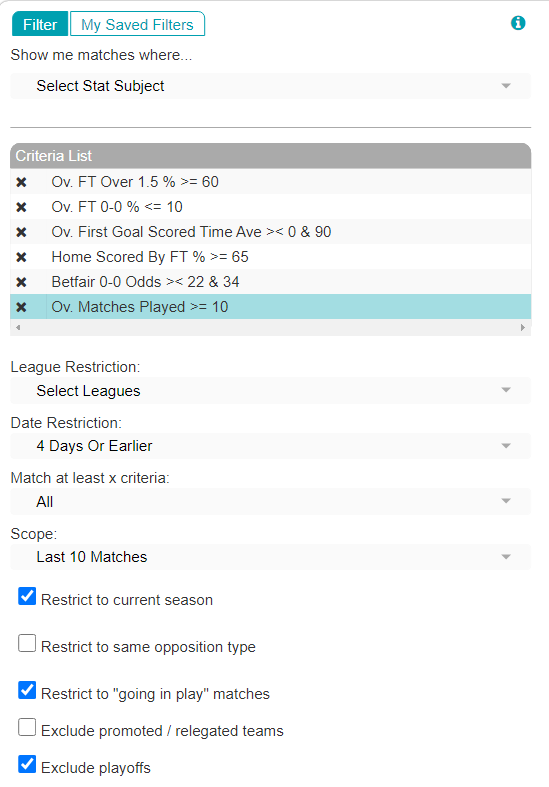 Now let's go through the criteria and see why it has had success and how you can apply it to your football trading to make money on Betfair!

As with any football trading strategy that relies on goals we want games that are expected to have goals. 60% over 1.5 goals is not a high figure, so any matches with less than this historically are likely to be poor for this filter, hence their removal.

We don't want a 0-0 result, so should look for matches where the teams rarely have them.

Similar to above, this won't filter out many games specifially but the ones it does will be worth avoiding.

We want the home team to attack and score regularly, if they don't it could be a slower more defensive game.

5. Overall more goals scored in the second half -

We are going for late goals, so give us the teams that score more in the second half than the first!

7. Overall Matches Played equal to or greater than 10  -

We want a reasonable amount of historical data, so that we can make more accurate predictions.

We are after second half goals therefore we need the market to be in-play when we trade it.

We want regular season fixtures only, playoffs are not normal games and teams do not behave the same as they do in league fixtures.

So here we have the filter, the criteria and an explanation of why they were chosen.

We have found that this fitler performs best when going for a second half goal, that is when we back another goal on the Betfair exchange at HT or later in the half (for better odds).

Check out the full results here

Hopefully this has helped to give you some ideas for your own Betfair trading football strategies, maybe you even want to try trading the second half goals yourself!

If you have any questions get in touch! info@betfairtradingcommunity.com